I often find it in my sub conscious the call to wear matching clothes for me and my son. It's never easy, at all! Out there in the market, it's mostly for mothers and daughters set. How cruel isn't it? I tell you, it takes a whole lot of tapping your creative juice and a good deal of patience to find one outfit which would suit both of us. There were even times when after a whole day of looking, and searching 'the four corners of the earth', I went home empty-handed. If you got a son, this happening is not new!

There were lucky days though. Like these matching trousers which I got after just a couple of hours of searching and digging. I admit however, that this particular pair was not made 'for her'. But with dignified poise, grace and the sweetest :-) i could tell it worked! 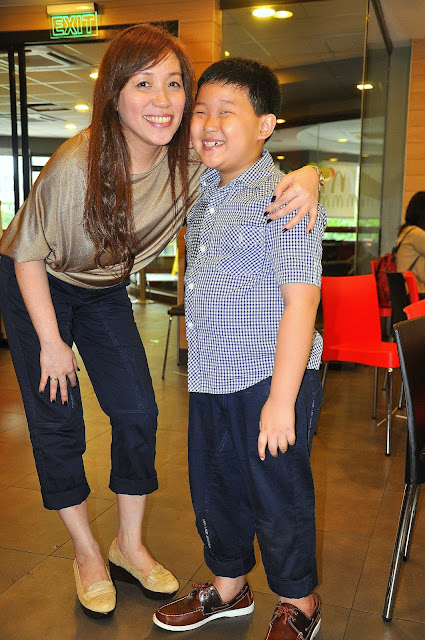 Still, i'll keep on digging for finds....
Posted by Unknown at 2:35 AM No comments: Links to this post

Spoiling Kids with Everything

Luis has been to quite a few places during his first seven years. I took him to his first out of the country adventure when he was 4. It was Hong Kong Disneyland at first. After which, a few more adventures followed like Singapore's Universal Studios, Pattaya's premier beach resort and spa, Disneyland Paris, etc. He was also quite been exposed to plays and cultural shows, international and otherwise, whenever my time permits and budget considered. We've watched Kaos, Cirque du Soleil's Varekai, Tiffany, The Sound of Music, Masters of Illusion Live, etc. I am happy and out in full force especially when I see him lit up whenever i spoil him like this. I admit, I'm getting all choke up watching his mesmerized expression.

But at times, there are also moments of stark reality whenever he asks if he could have one of those items in Toon Studio, or an oversized Buzz, or those insanely overpriced boxes of cars.

Although not easy, the answer was usually a no. And while my son doesn't complain, I would catch his casting sidelong glances at those toys. I could tell when my son wants one so badly. He will keep quiet. As a mom, I feel a twinge of pain for my son, but I know it is the right thing. It is just not practical to fork over 60euros for a piece of toy.

Come to think of it, even if I am made of money (wow! eagerly waiting for the time), that’s not how I want to raise my son. I don’t want him to expect to be showered with treats and presents every time. I do know that the more children get, the less anything means to them. And the more stuff they get, the more they believe they deserve things just for being alive.

In the end, stuff is just stuff. (Then why does he have all these gadgets now?! :D) It’s not love. It can’t make up for time together. And honestly, it’s never enough. I’d much rather my son go without some stuff than begin a lifetime of entitlement. I would rather teach him to be practical, and spend on something that will matter for a long time, if not forever. How do I say no in a way that makes my kid still feel loved? Explain the reality.

Parents must not give in to demands from children (guilty at times!). The teaching of discipline and self-control must be the order of the day. Unfortunately, many children believe that life is meant to be an endless stream of pleasures, with the only role of a parent being a provider of entertainment. They feel that way because they have been overindulged and coddled. I call on all parents, let us teach our children that life is hard, and it requires great discipline to be successful.

Till next...
Posted by Unknown at 8:44 PM No comments: Links to this post

Got nothing to do, or got too bored doing a lot at the same time. I maybe a dedicated mom to my 7 year old (soon to be 8 next month), but I also take it seriously when it comes to work (at least, it has been said). I am just echoing how it sounds! Or am I hearing my staff clearly? :D Well, as I always say, this is my site, and therefore it comes with the territory. I could claim being a workaholic, being the sexiest in the world, the most gorgeous, etc., etc., without fear that somebody might have a differing opinion. I say to whoever, get your own site. Haha.

Anyway, frankly speaking, the thought that I am a workaholic is an indigestible proposition! I personally need a little push to even make myself agree with myself. And so, one click of my dslr, and i got it! Yes, maybe, I am a workaholic. You judge. 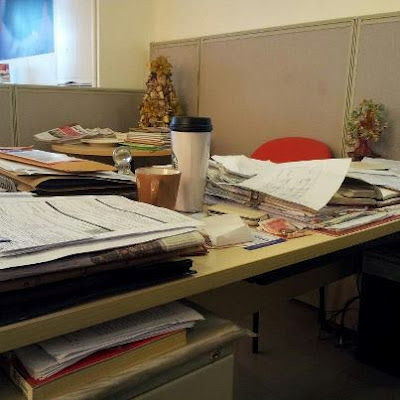 (taken on a lean day, at noontime. backtable not included, which has its own pile of paper clutter-more confusing and in a worst disorderly state)

Posted by Unknown at 3:42 PM No comments: Links to this post